A lap of Wakefield Park 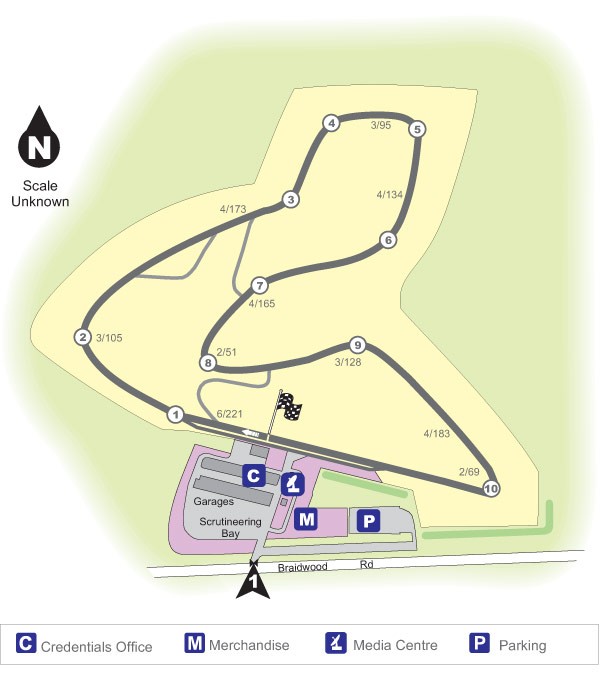 Coming down the main straight keeping fairly close to the pit wall on the left (and surprising anyone leaning out too far 🙂 ), you cross the start/finish and find turn 1 approaching quite quickly. It’s only just barely a corner and is more of a kink, so swing across from the left and straight line it as much as possible, drifting back over to the ripple strip on the left to set up for turn 1. On the LC I keep full throttle through the apex and then hit the anchors just after the dip and drop it down a few gears, but on a faster bike I’m going lot faster and hit the anchors a bit sooner, which makes the dip just after the apex more pronounced so be ready for it and don’t outbrake yourself.

Turn 2 you want to apex as late as possible and carry as much corner speed as you can so you get a good drive up the hill. It’s a fairly wide exit, so don’t be afraid to let it drift out to the edge of the track a bit, but be careful of the ripple strip on the outside as it’s got a big transition that can unsettle the bike badly. A good exit will set you up nicely for the entry to turn 3 and don’t forget to tuck in on the run up the hill.

Turn 3 is a really important corner to get right and it’s made more difficult by the righthand kink in the track just before it. The kink isn’t quite a corner, but it’s got a big ripple strip and you want to be coming into it as straight (late?) as possible to get the entry into 3. Turn 3 has a patch of track with some bumps from the cars right in the middle of it, but if you apex it late and keep it in tight you miss the worst of it and don’t unsettle the bike too much. Don’t be tempted to drift wide on the exit, if you can you want to stay near the middle and move left to get a good entry into turn 4.

Turn 4 and turn 5 should be done like one corner that you double-apex. Coming into 4 with a wide entry means that you can carry more corner speed through into 5. Again you want to drift wide out of 4 keeping the bike leant over so you can get a nice entry into turn 5.

Turn 5 has three things that will put you off until you get used to them. First up is the absolutely massive ripple strip on the inside. Don’t be tempted to get too close to this because it will catch a footpeg and throw you off. I generally line it up so me knee goes over it, but again, hold your knee up and don’t be tempted to touch your slider down on it, I’ve seen people lose kneesliders that way. The second problem is that if you stay too far away from the ripple strip, you end up on the big bumps that are just on the apex from the cars, and they can unsettle the bike pretty badly, sending you out wide towards problem number three which is the big drop off on the outside of the track. Run off there and you’d better have the bike upright then be prepared to find a section that you can get back on without having to do a bunny hop. You still want to run out wide though so you can get setup nicely for turn 6.

Turn 6 and 7 are a fast downhill section that you can make up a lot of time on if you can carry the speed through them. There’s nothing really technical about them, just make sure you get the normal late apex and don’t drift too wide out of 6 so you can get a good line through 7 and into turn 8.

Turn 8 is a notorious corner that catches a lot of people out. When you get there, you haven’t spent much time on the left side of the tyre so it can still be quite cold, the corner doesn’t have much in the way of camber, you’ve carried a lot of speed down the hill and you’ve got people coming in from every direction trying to pass you. Added to that is when it’s rained recently, this will be one of the spots that gets a lot of water and mud across it, so it can be pretty slippery first thing in the morning, especially on a cold day. Drift out of the first apex as wide as you need to, but again be careful as the wider you go the slipperier it is, but make sure you bring it back in and apex the second part of the corner late. Just like with turn 3, you want to be coming out of the second apex no wider than the middle of the track and try to keep left so you can get a good entry into turn 9. The faster guys will be able to spin up the rear to tighten the line and hug the apex to help to this.

Turn 9 is another corner that you can make some ground on if you get a good run at it. Again late apex is the line of the day so you can get on the power early and drive up the inside of the other riders. It also keeps you in tight and helps avoid the worst of the bump that’s on the exit of the corner just as you’re hitting full throttle. Tuck in and power hard down to Turn 10, braking as late as you dare.

Turn 10 is one I’m still trying to find a consistent line through, probably because I like jamming it up the inside and outbraking people there, so I stuff up my entry and run a bit wide on exit. In theory you want to come in from wide left and apex it quite late, be aware that you’re leaving the door wide open so be prepared for another bike to be in the way when you sweep back in, but then you can get the better drive onto the straight and can pass them back again. It’s also fairly bumpy in the braking area, so be careful you don’t get unsettled and outbrake yourself. Also look out for riders with their hand up or foot out as they are heading into pitlane and you don’t want to be on the outside of them. The track is really wide on the exit of 10, so you can run it out if you need to and make sure you bring it back in before you get to the tyre wall where the track narrows again.

From here you are back on the main straight, tucking in as tight as you can (it’s amazing how many people don’t tuck in down here) and banging it up through the gears, keeping close to the pit wall on your way to the finish line again.